Isn't fishing sadistic? People catch a fish by hooking it and then suffocating it by pulling it out of the water.....then they throw it back in(catch and release) so it can get hooked again.
Living one day at a time;
Enjoying one moment at a time;
Accepting hardships as the pathway to peace;
~Niebuhr
Top

I think taking lives is always wrong & that too if other better options R available..
If we have some religion which includes killing organisms , we have not made the religions & customs so we R not guilty here, we shud respect religions
if they R really original[/color] , but keep in mind if these religions do not affect our MOTHER earth adversely.And seriously, test if they have any meaning today.
These religions may have been non- hazardous when they began , because at that time humans may be disturbing ecobalance to a lesser extent.
Also, I think killing plants is also not good , but its natural for us ,we R adapted for eating veg. as main diet , so its not wrong as this is expected by MOTHER nature [but only for survival]
I believe all organisms have feelingas but they go on reducing with reducing complexity
So , killing a plant or bacteria is better than killing a fish................................
If still want to kill them , give them les pains.

Re: Ethics of Fishing

mithrilhack wrote:Isn't fishing sadistic? People catch a fish by hooking it and then suffocating it by pulling it out of the water.....then they throw it back in(catch and release) so it can get hooked again.

Ever seen a cat catch a mouse?
Top

Yeah, the cat plays with the mouse until it dies. But do we have an obligation as humans not to stoop to the level of cats?
Living one day at a time;
Enjoying one moment at a time;
Accepting hardships as the pathway to peace;
~Niebuhr
Top

It really disappoints me that so many people still haven't figured out the right question to ask. There is no generalization possible regarding whether fishermen or hunters are bad people. While many of them are, it is not because they fish or hunt. Some may be greedy and take animals which they shouldn't or more than the population can sustain, which is clearly wrong. However, at the end of the day, we all must eat something to survive. Most city slickers choose to buy their meat and fish at grocery stores, because they don't know how to harvest themselves and believe the whole concept of fishing and hunting is sadistic. Most of these individuals have no problem eating veal, chickens that spent their whole life in a 12 inch box without ever standing up, or eating farm raised fish / game so long as its all cut up and they don't have to see it before its processed.

Others choose to harvest their own meat and vegatables either out of pride, tradition, or lack of confidence in the commercial system of maximizing profits, which includes injecting steroids, antibiotics, or others into their meat to make it bigger and bulkier. The crops are genetically modified and then sprayed with herbicides, once again in the interest of maximizing profits. Many of us prefer to catch our own fish to fill our freezers than buy farm raised fish, fed on dog food, in small tanks way over natural holding capacity, and loaded with disease and bacteria not naturally found in the lakes and rivers.

Do fish feel it when they're hooked? You better believe it. Does it hurt? I would say that it must. But on that same token, millions of people stick chunks of metal through their faces and bodies every year, but no one is suggesting that the tatoo shop owner is sadistic for allowing the practice. I know that the fish I keep to eat and the deer / moose / bear that I harvest don't threaten the sustainability of the population, and as such, pride is my sentiment towards the situation. I've let go many fish, especially in small brook trout streams where the population is vulnerable. Science studies indicate that the large majority of released fish survive to breed again, and by selectively keeping those fish which are foul hooked for the supper table, the survival rate for released fish keeps increasing.
And so, if I catch 50 brook trout in an afternoon, and keep 5 for supper for myself and my family, it doesn't make me feel bad or unethical. I know that the trout that I've eaten have lived the best lives possible, not stuck in boxes and fed dog food for their lives. I know that the one's I release will likely spawn again in following years. 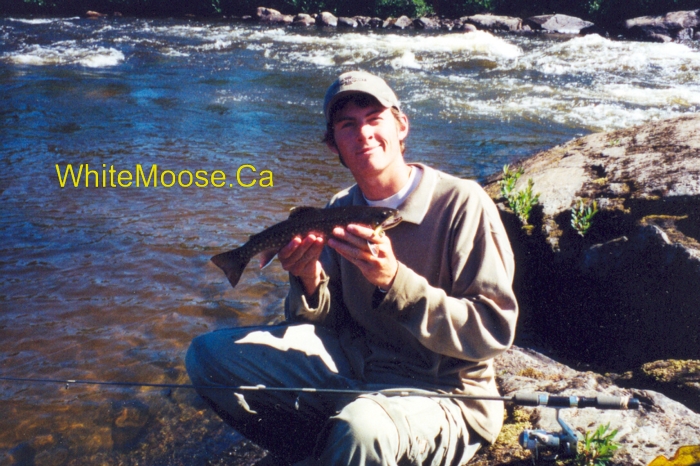 Maybe the best question is, "Don't you think that keeping a chicken in a box that's too small to stand up in for its entire life, while it lays eggs for your omlette, and then killing it for your local Kentucky Fried Chicken shop a little sadomasochistic?" 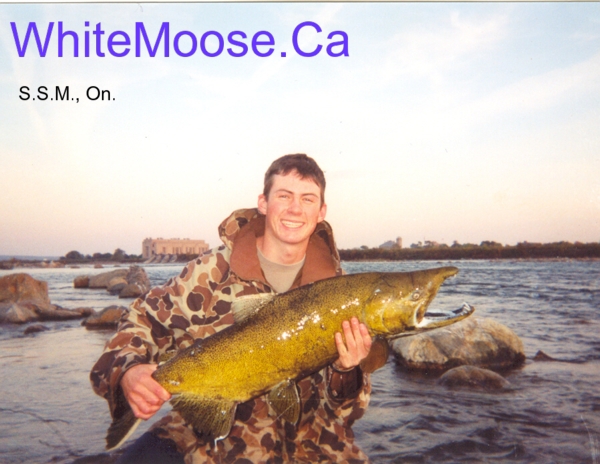 Thank-you for pointing out those things whitemoose.ca! I respect hunters like you (I'm assuming that you're a hunter) and I'm glad that you have brought up issues like this and I hope you will continue to do so in the future.

-thank.darwin
No amount of experimentation can ever prove me right; a single experiment can prove me wrong.
-Albert Einstein
Top

Here's the vegetarian's argument: we can subsist on plant diet without resorting to violence.
Living one day at a time;
Enjoying one moment at a time;
Accepting hardships as the pathway to peace;
~Niebuhr
Top

We shud kill organisms if & only if we don't have any other better option.

2810713 wrote:We shud kill organisms if & only if we don't have any other better option.

I know what your saying- I don't like people who hunt for sport
-Thank.darwin
No amount of experimentation can ever prove me right; a single experiment can prove me wrong.
-Albert Einstein
Top

Does anyone know what a "Farmer's Deer Block Permit&quo

I don't really understand where all this touchy, feely sentiment comes from regarding fishermen and hunters. City people feel so good about their vegatarian diets, but unfortunately have lost touch with the reality of farming. I'm going to speak about michigan only, because thats the only place where I know the farmers, but I'd wager that its very similar in other states / provinces. Animals love to eat farmers crops and farmers love to sell their crops to people. Farmers are issued "block permits" meaning that for every acre of farmland they own, they can harvest approximately a dozen (often more depending on the township) deer that are eating the crops. No permits are needed for other animals like raccoons, ground mice, prarie dogs, or other nuisance animals. Basically, we live in a world where people from the city believe that by only eating farm produced vegatables, they are not contributing to killing animals, which is a common misconception (because they have no idea how it actually works). So in many cases, vegatarians are actually paying farmers to kill deer and other animals simply by buying the produce. They get that nice, touchy, feely sensation because they themselves didn't have to partake in killing off the wildlife, but it doesn't mean that they didn't encourage or FINANCIALLY SUPPORT it. Grow your own veggies in your backyard if you really care about the animals... otherwise, just be content to be in the club of uniformed and idealistic animal lovers. 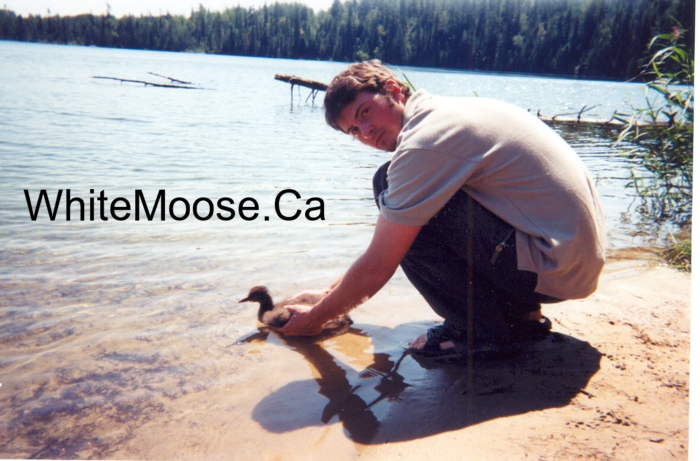 (Pic of a baby loon I found approximately 1 mile from any water on a logging road. LIkely dropped, but not killed, by a bald eagle.)

2nd, the arguement about Humans should only kill organisms if they have to. If I do recall correctly (maybe the details are off a bit), the religious finatics in India were using the same arguement to protect the rats that were living in the grain silo's. Rather than putting up traps to kill the animals, they let them live in the grain, defecate, and fornicate where they wanted to. Then, they sold the grain to people, and everyone was getting sick. Big surprise right? Bottom line, I respect the decision to become a vegetarian and would likely go that way myself if I couldn't harvest my own meat (because of my lack of confidence in the commercial system), but understand that there are many times when the best action is to kill animals, for food, or to prevent them from destroying human food. 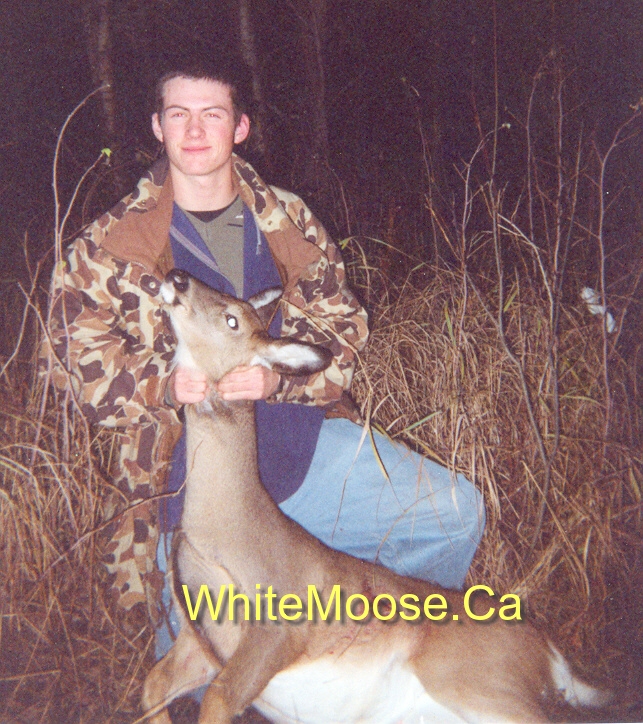 "It is our goal to bring about responsible hunting, fishing, forestry, and natural resource use including the use of alternative energy sources such as co-generation plants through the spread of the truth."

-I finaly got a chance to visit that site - I wasn't aware of such a site and I'm glad I now know!
No amount of experimentation can ever prove me right; a single experiment can prove me wrong.
-Albert Einstein
Top

The answer to this poll depends...

The answer depends on how u define fishermen being bad..... If u think of it as killing fishes, then of course they are bad..... If u think of it as they are fishing to provide us with food containing proteins, then it's not that bad..... Many people will say being a vegetarian means not killing animals.... It's somehow true, but it means u are killing plants..... It's not totally true as if we all become vegetarians, then won't herbivores have to fight with us for food? Generally, man will get the food as we have technology.... So it is an indirect way to kill animals..... If we do not want to kill anything, then we might as well not eat! If we do not eat, we will all starve to death and it means killing ourselves.... so everything leads to death..... it's nature and thus, we cannot help it....
Top
Post Reply
50 posts