Does streptavidin have coujugation with carboxyl group witho

Debate and discussion of any biological questions not pertaining to a particular topic.

Does streptavidin have coujugation with carboxyl group witho

Recently I conducted an experiment to conjugate amine-modified oligonucleotide with hydrogel particle have carboxyl group. However, the fluorescence appeared as if it were green highliter(because I used FAM-DNA for hybridization) and it took a point on the particle, like image below. 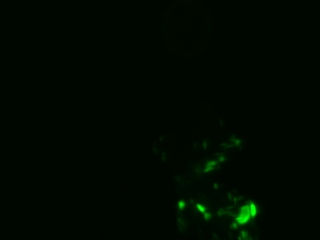 The shape of the particle is too invisible. When doing hybridization, the same phenomenon lasted despite having done shaking progressing.

So, advisor said 'DNA is negative charge and carboxyl group also have negative charge so there is no possibility of conjugation, conjugation of streptavidin to particle, attaching biotinylated DNA and proceed with hybridization?'.

However, conjugation using NHS / EDC requires both an amine group and a carboxyl group, but is it necessary for streptavidin to do such a conjugation? Streptavidin is Sigma Aldrich's 85878 (Streptavidin of Streptomyces avidinii, affinity purified, 10 mM potassium phosphate, lyophilized product of ≧ 13 U / mg protein).

PS: Please tell me if there is a secret to make it evenly conjugation on the surface.